I have been out of cams discussed in this forum for a while now. All I have left is a Kodak 760C, and that is the other forum, and not much to say about it other than I still like the F5 body and the Kodachrome colors. My wife is tiring of digicams. Wants something better. The 760C is a tad too much to begin with, so I was thinking how much I liked the D1H back when, and coupling it with a 28-105 macro zoom I have kicking around. That would start her off pretty good I think. And, for under a hundred bucks from the look of things. I even still have an SB28dx flash hanging about. I use it on the 760C, but not often. I am either out in the good light with that, or using studio lights.

Anyway, that got me to stinking, er thinking, maybe go looking for a D1X to boot. Back when, I had both. That also brings up my question:

Which Nikon DSLR used the Sony imager from the D1 series, but in single pixel mode?

That, as opposed to the D1 and D1H using it in quad pixel mode, and the D1X using it in dual pixel mode. My Sony Imager database in my wetware is a bit sketchy. Used to be I knew all about every imager from Sony, when I was Sony Ericsson and loading cams into every phone we did. That was a while ago.

Hopefully, someone who recalls sees this. I have been looking in on a weekly basis for some time, and see practically zero activity. As I say, hopefully I am not the only one who has kept on looking in even though not much was going on.

Well, I found a decent seeming D1H on The Bay. At least it had a couple sample shots, unlike most of those up for sale. It was a straight auction, so I had to wait it out. Got it for $66 USD. Not bad! We'll see how it works out when it gets here in a few days.

Actually, I want the D1H more for myself for shooting at the track like I used to. The Kodak 760 does well, but when 'stuff happens' it hasn't the frame rate I need. I think my wife will wind up better off with a D1X, so now I am looking for one of those as well.

In the end, I will probably wind up with one of everything. Again.

So, most of the D1X units out there right now are being offered by camera shops. They take pics of the units, but not one of them includes even one pic taken with the thing. They just say 'it works'. It seems only individuals figure buyers might want to see how the imager is working.

Reaching about 500 digital cameras I'm fed up - with boaring consumer digital cams. But I will go on using my "Kanon" containing about 30 different DSLR and mirrorless DSLM bodies an brands. My priority lays on Nikon, but I have no problem using the great Canon EOS 1D as well as my working Fullframe Kodak DCS ProSLR/c Sigma-based SLR with EOS Bayonet. So far I do not own the Nikon Kodak Fullframe DCS version. Or taking pictures with the mirrorless mFT Olympus OM-D E-M10...

This should last a lifetime

The only thing that does not work with my D1X ist the second (highformat/portrait) shutter-switch.

I love my D1X generating great 10 MP files if you use Nikon NEF! 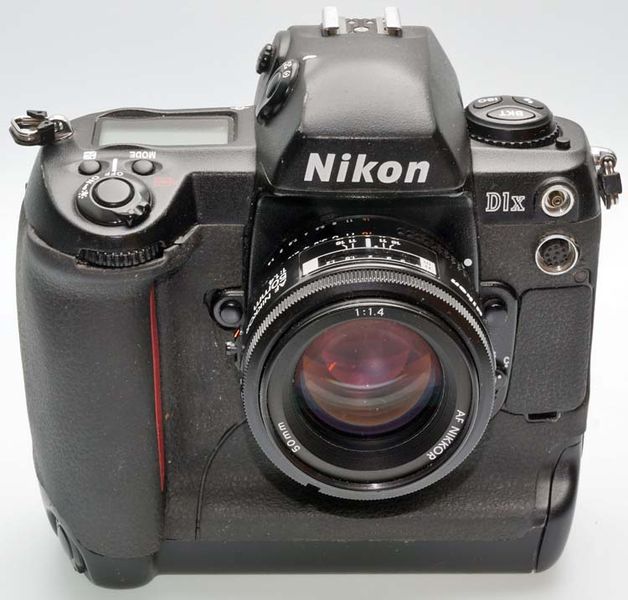 Should really be possible getting a D1X very soon. Do not frustrate Stan!

Yes, I don't think I will have to wait long before I spot the D1X I want. I have already decided to couple the D1H to an AFS 80-200 f2.8D lens and use it at the road courses like I used to. More on that later.

What prompted all this is we finally bought a Direct-To-Garment printer for the screenprinting shop. Think of a large format photo printer but built as a flatbed. It uses Dupont fabric inks and prints directly to fabric. In this case, mostly T-shirts. We also have a gourd farm, and went to someone else's gourd farm and there was this interesting shot she wanted to use as a basis for a new shirt to sell to all her gourd buddies. And, all we had were 8 MP cell phone cameras. Sigh.

So, now she has a small need for something better than a point-and-shoot digital camera. I can always grab my 760c and bag-o-lenses and go out and shoot what she wants. But, I am not always going places with her, nor do I always grab the Big Kit as I'll call it. That is in two bags, a small one for the camera body, batteries, charger, flash and that fills that one up. The other is a large bag full of all those AI prime lenses I have had forever.

Anyway, what I see is a D1X for her with one zoom lens and that makes a simple kit she can grab and go with. I really think she needs more megapixels than the D1H provides for what she wants to do with it. That gives her some cropping leeway later in Photoshop and Illustrator. Besides, there is another opportunity to produce shirts for racing folks on the DTG and I know how to get really good track shots with a D1H and an 80-200 f2.8 zoom lens.

As far as other models go, I know that Sony originally used four sensor photosites ganged together to form one pixel on the original D1 and D1H. Then, they used them in pairs in the D1X as they improved the signal-to-noise ratio. Later on, they improved their S/N ratio further and Nikon used it in, I think, the D80 and the D200. But, I still have not found the posts out there where all that was discussed at the time. It isn't critical but I never did get one of those at the time and would like to see how that worked out in the end.

Well, the best laid plans and all that. The D1H came to the screenprinting shop today. It'll have to wait until I get home to check it out, but my wife doesn't like it because it is too large a body.

Well, the D1H works just fine. Took me a few minutes to recall just how it operated. It has been awhile. I was wrong about my flash unit. It is an SB28d, not a dx. For the F5 based 760. Makes sense. I probably won't use the D1H with a flash anyway. The original thought was for my wife. I rarely use a flash.

OK, time to try again. Just won a D80 with an 18-135mm lens and goodies for $160 USD. So, we shall see if my wife likes this one when it gets here. Plus, I get to see just what the guys at Sony had manged to make that original DSLR CCD design do in the end.

Next up: dig up an AFS 80-200 f2.8D zoom lens for the D1H for use at the race track. All this mucking about made me go back and look at the track images I had taken with that setup. They were quite good, actually. Good enough to have me make up a dedicated road track rig out of that D1H.

What I don't know is what to go looking for if she doesn't like the D80......Oh, well. I shall cross that bridge when I get there.

all of them had that CCD color that now i'm missing on the D800. Give it a shot to the D3000, is a good starter camera and one of the most complete units carrying CCD, also has a huge monitor.
Kodak NC2000e - www.instagram.com/skinny_poronga
Top

The sensor in the D200 and the D80 is the same base unit used in the D1, D1H and D1X bodies. So, it isn't just a CCD I was after, it was the fourth iteration of that specific CCD I want to mess with. Plus, it may well get my wife into this whole hobby.

The D1 sensor was a 10 MP unit, but the signal-to-noise ratio was poor. So, they ganged four photosites under one CFA filter and lived with the lower resulting resolution. They made SNR improvements on the D1H and that went well enough that they decided to double up the photosites under each CFA filter in the D1X.Hence, double the resolution of the D1X v the D1H. Further improvements led to single photosites in the D200 and then the D80.

I just want to see how well the entire effort paid off is all. Just a curse of being an engineer, I guess.

I don't think they are related sensors. There was a lot of jumping about back then. Different in each camera there for a while. In fact, it was a surprise when Nikon went back to the Sony CCD when it happened. By then, most had switched away from CCD to CMOS. I knew of the photosite vs pixel layout scheme, and also knew Sony had finally made it 1:1 with it, but nothing used it. Then, I heard where Nikon had revisited it, but didn't buy one at that point. Now, it is all very old news.

Well, it arrived and seems to work OK. Just not for long. Sad Battery Syndrome. So, some new battery packs are on order. We didn't get enough shooting to tell much, just enough to evaluate the camera operation. Also, enough to know she likes it (whew). And....that she already wants a second, longer, zoom lens. We all know about Lens Addiction, don't we?

I also ordered a new battery for the D1H. The one it came with seems OK, but I have yet to go to my electronics lab and hook it to my battery analyzer. As long as I was ordering for the D80, might as well get a second for the D1H.

if they are en-el3 they are really easy to get, i've had like 10 of them and more or less they are a workhorse even cheap fake clones.
is there an easy way to know what pixel configuration is using the camera?
Kodak NC2000e - www.instagram.com/skinny_poronga
Top

The new batteries arrived today, so we have a nice, long, weekend to play around.