Checking and playing with my Nikon F5 Kodak DCS 620x and DCS 760 the other day I decided it's time to charge the Li-Ion batteries. Now I tried something new.

Sometimes you do not see the wood for the trees 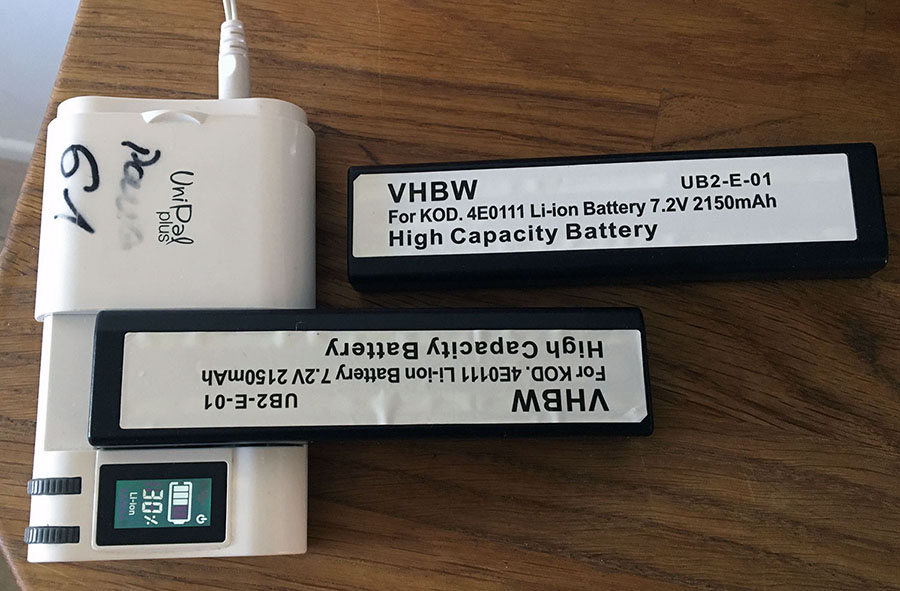 I used my available universal charger in the foto and it worked perfectly! Maybe it can help any DCS 5xx, 6xx, 7xx user!

On, man! The Mind Boggles!

It all boils down to how well the makers of the packs and chargers did their engineering. Li Ion chemistry needs a lot of handholding in both the charge and discharge direction. One has to watch the rates, both voltage and current. This needs to account for the current drains for each and every operating case within the device the batteries power. OEMs usually do this properly, although there have been some sensational news items from time to time where the OEMs got it wrong.

All this resides within a controller chip within the battery pack and another within the charger and they have serial data lines between the pack and the charger. This is simplified if the charging takes place within a device. In any case, their is a Field Effect Transistor switch inside the pack which can be opened up if the rates and levels get out of whack. This prevents the *poof* of the Li Ion cell(s). Usually.

What always worries me is when someone makes a LiIon pack up to replace a NiCD or NiMH OEM pack. Now all the work has to be incorporated within the controller inside the pack. Hopefully they did that properly. Heck, hopefully they put a chip in there to begin with.

This thing you show looks like both the charger and the pack are from the same maker. So, they probably got it right.

The next part concerns where the cells came from. OEMs usually have tighter specs for them, and the cell makers cull out ones that don't make the grade. Those go elsewhere and wind up being made by 3rd parties into low-cost packs. Those can be sold as equivalent replacement packs but might hide a really weak performance cell(s). Hopefully, those just don't last as long in service. But, weak cells also have this nasty tendency to swell up like a dead possum alongside the highway in July. This usually means the danged thing gets stuck inside the device. Sometimes they go *poof*.

Of course, the swelled up Li Ion pack also occurs to OEM packs sometimes as the pack nears end of life. They make gas and swell up the sealing bag around the cell. This is within any plastic outer shell, but the pressure is enough to crack the shell and swell up anyway.

I recently had a client who was experiencing all sorts of oddball failures in their year-old devices. The root cause was swelling Li Ion packs which were installed centrally within the device. Those cells were from a source where they had a bit of an issue due to ramping up due to extra demand. And, all this was with proper engineering. Just an Oops.

I am still using BlackBerry Z10 phones from 2013. A product I did R+D on. The 2013 LiIon packs are beginning to swell up from age. So, off to eBay for some replacements. $2 each, so they don't break the bank.

But, I chose actual BB OEM batteries. One of the uses is one phone that sits in a window here on the farm always hooked to a charger. The phones won't operate minus the battery or I'd not have had a battery in. It connects the cell service to WiFi and so I can have internet. This is all that is available here. Well, also satellite, but that has so much latency that it isn't a good option. But, that is another story.

Anyway, that battery puffed to the point where it popped the snap-on back cover off. That propelled the phone to the floor where the battery fell out. An automatic safety device!

I then -carefully- discharged the pack to render it safe. I feared it was close to the *poof* point. But, discharged packs don't tend to *poof*. Not enough energy left. Now I carry it around to show folks just what I mean by a Puffy Possum Battery.

So, keep a close eye on those things. Me, I will stick with NiMH for my Kodak DCS cameras. I still have three. A 760c, a 660m and a 520c (that last is ususally battery-less and on the AC supply). If new NiMH packs become unavailable, I will re-cell myself but use NiCD. I still prefer NiCD over anything else. That is one robust cell chemistry. Heavy and low capacity but they work under all sorts of extremes. Once they got rid of the memory effect, they have been my go-to for my own stuff. Especially 2-way radios.

On my NC2000e the batteries just leaked out, so i'm running it on li-ions, i made a higher voltage series connection than what camera needs so the charger will always undercharge the li ions for safery measures, since the li ions are from much higher capacity that the original ni-mh i can get even more battery life than with the original battery and on a very safe point. As to avoid overdischarging i'm using good quality and well tested phone batteries for the pack so when is about to overdischarge it just simply opens the FET and the camera dies till i recharge it
Kodak NC2000e - www.instagram.com/skinny_poronga
Top

NC2000 was originally NiCd, not NiMH. As were the later stick packs. Kodak didn't go NiMH until later on during the 5xx and 6xx series. And, then they had a charger change from the Flat to Angled Top unit. The Flat Top had a trickle charge for the NiCd rather than a full shut off. Trickle charge is bad for both NiMH and Li-Ion.

I am thinking if there were NiMH cells in there, the trickle charge is probably why they leaked. NiCd can absorb the gas production of up to 10% of the rated capacity. NiMH cannot. Gas pressure builds up and the seals vent. Eventually, some electrolyte leaks out.

My 460 had the internal pack and charger as did all the models that came before it. Used NiCd and had a trickle resistor. I know as I had to rebuild it and used new NiCd cells and checked operation of the charging circuit before reassembling the camera.

I think if the Li-Ion is working in your NC2000e, then you have a monitor chip in there which is handling the charge cutoff as well as the discharge cutoff. Which is good and what should be in all Li-Ion applications (but isn't always).

Quite late my answer but yes, each li-ion cell have their own controller chip since they are recycled cell phone battery, good original ones, mostly motorola and blackberry since they proved to last on spec the longest.
Also because of this behavior the integrated batery meter on the nc2000e is totally useless since is undervolted it always displays to have half-ish the battery till the day some cell reaches the discharges threshold point and it just shuts off... still this gives me some whooping 700 shots of battery life or a month and a half or so of the camera sitting on the shelf. Paired with a 1066x CF 16gb card (formatted at 4gb) gives me a non-stop shooting action for days!
Kodak NC2000e - www.instagram.com/skinny_poronga
Top

One thing to watch out for: LiIon batteries tend to puff up when they get old. Yet, they still continue to operate. In the cell phone, at least the BlackBerries I did R+D on, this condition led to the self popping off of the back cover before the things popped.

In that camera, you won't be alerted automatically. Well, if the battery popping then led to more of an issue, you would be alerted. But, then, the camera might well be junk afterwards.

Anyway, open that up and check once in a while for what I call the Puffy Possum. You know, like on the side of the road on a hot summer day.

One of the more common failure modes I see in my lab are Puffy Possum LiIon batteries. In the products where they bury the battery in the center, it is mostly cracked LCDs that clue one in.

Here are a couple pics of a Puffy Possum battery next to one without an issue:


The Puffy Possum is still operating as far as charging and discharging goes. So, doing that doesn't help identify that the battery is in real distress. Or, real stress looking at how the sealed bag is puffed up....

Sorry for the lousy cell phone pic on a photo site. But, that is my main documentation camera these days. Real cameras are used for more microscopic views.

This particular use is in a device with a back cover, so all this one did is pop the cover off. Sort of self-revealing. Other devices bury the battery and they tend to let one know by cracking the LCD display. Some will be pull-out designs and the thing gets stuck. Still others won't show anything until the thing pops the bag. At best, that really stinks. At worst, the popping shorts the cell and you get smoke and fire.